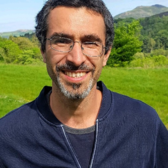 AI in customer support should be a commodity. Like database software.